Once again I encountered a minority that I could not find a full collection for, so I browsed various sources for individual tales. The Jino (Jinuo) people live in Yunnan province in Southern China, and number a little more than twenty thousand people. They are one of the smallest minorities, and the last one of the 55 that were officially recognized (in 1979). They are known for their colorful woven outfits. Next to hunting and gathering, they cultivate land cleared from forests by burning.

The tale of Lady Fish was both beautiful and sad: a dragon king's daughter married a mortal man, but her husband started cheating on her after a while, so she left him. The husband learned of a way to win back his wife through magic, but he was too lazy to do it properly, so the relationship ended for good. 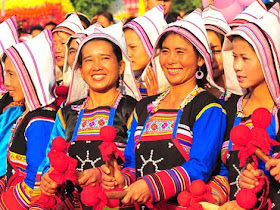 The myth of the goddess Amoyaobai was the most beautiful "shooting the suns" story that I have encountered so far. The goddess gave humans intelligence so that they could solve their problems with thinking, rather than violence. Then seven suns rose into the sky and threatened the world, people threw rocks at them first, but then decided to negotiate in a kinder way. They managed to convince the suns to rise one by one and take turns.
I also read a Jino flood myth: after the flood, the first people of every ethnicity climbed out of a giant gourd planted by a brother and sister. The story explained why the Jino have no written language (they are the ox hide they had written their characters on), as well as the speech and skin color of various peoples. This myth is a very popular part of the Jino tradition: I found it in two more books, here and here.
Tricksters were represented by a man named Atui, in a story where in good trickster fashion he managed to steal other people's food instead of eating his own.

Who's next?
The Monguor (Tu) people