Once again, sadly, I could not find a full book of folktales for the Hani tradition, so I read stories from multiple different publications. The Hani live in Southern China and other countries of Southeast Asia, numbering almost three million people. Among others, they are famous for their folk songs, folk music, dancing, and beautiful silver jewelry.
Highlights

The most beautiful origin myth was about a goddess named Lady Yao, who stole from her strict father the seeds of 77 useful plants, and gave them to the people. her father turned her into a dog as punishment, sending her to live with humans. Commemorating her sacrifice, the Hani give the first plate of food from the harvest sacrifice to dogs every year. Selflessness also played a central role in another legend, which explained the origin of rice: here an abused servant girl discovered that the seeds of rice are edible. She used her discovery to save her fellow servants, and get rid of a cruel queen.
Nimaxingtian was a dragon-slaying hero who would put many others to shame: according to legend he had one eye and one, axe-sharp ear. He defeated two evil dragons by shooting blinding light from his eye, and chopping them up with his ear. Another dragon-slayer was a female hero named Amatu; in her legend she first convinced a monster to eat cows instead of people, and then dressed his two sons up as girls to help them sneak up on the monster and kill it. 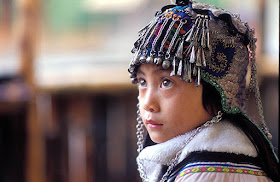 The Hani also have a myth about shooting down suns: here an archer named Erpupolo shot down eight out of nine of them. The last sun hid, and had to be lured out by the crowing of a rooster (which was not a pretty song, but very honest). Another legend explained why sun and moon alternate in the sky: two brave siblings, Ah Lang and Ah Ang, flew up to the heavens to convince them to keep a regular schedule. They are commemorated every year with a spring festival.
Culture heroes were represented by Maumay, a monkey who became a man, who, according to legend, stole the first rice seeds from the sky, sacrificing the life of himself and his horse. Another story told of a bird who turned into a man named Ahli, who created a wine water spring for the people as he was dying.

Who's next?
The Jino people
A Tarkabarka Hölgy at 12:00 AM