After a missed year, and half a year of further delays, this October we finally had a FEST (Federation for European Storytelling) conference again! Until the last minute there was a lot of excitement and anxiety around whether we can travel and gather, since everyone is still sad about having to cancel the conference in Turkey last summer - but in the end, we got the green light. The conference took place in Denmark, on the island of Fyn, in a lovely town called Svendborg. The island, among other things, is famous as the birthplace of Hans Christian Andersen.

I arrived to Svendborg Wednesday morning, after a long and pleasant train ride. Since we could not check into the hotel till the afternoon, some of headed to a restaurant for lunch and catching up. I got to meet Isabelle Hauser from Switzerland, who was at FEST for the first time, and I immediately wanted to be her friend. By the time we returned to the hotel, the other participants were also gathering: we had more than 100 storytellers, despite the travel and pandemic complications. It was amazing to see friendly and familiar faces again; the conference hall echoed with chatter and laughter. Some countries were missing or underrepresented this year for various reasons (I missed seeing more English, Spanish, and Turkish tellers), but it was still a great gathering.

After a short welcome speech we got to hear Henrik Lübker, curator of the Andersen Museum, talk about the museum's renovation and future plans, preparing us for our visit on Friday. After a noisy and happy dinner (storytellers had a lot to catch up on after 2 years), we had an evening lecture as well: Vigga Bro, one of the iconic persons of Danish storytelling, talked to us about her life and her art. She invited Abbi Patrix on stage for a conversation, and they discussed theater, storytelling, and even Andersen's tales (which were a topic of varied opinions throughout the weekend). It was an enjoyable way to start the conference.

The real work began Thursday morning. We had a General Assembly, where the board and EC of Fest told us about projects, plans, and budgeting, and then we held elections for new board and EC members. After the heavy lifting was done, we moved on to the professional workshops in the afternoon. There was a lot to choose from, but not for me: I did my workshop twice, 90 minutes each. It was titled Carrying the Story Bag: Continuing the oral tradition in the 21st century. I basically lead a discussion and brainstorming session with 20 people each time, about what tradition is, how we define traditional storytelling (do we need to?), and what we can do with it in the 21st century. I had a list of open-ended questions to spark thoughts and opinion (e.g. "What do you think of other people telling stories from your own tradition?" or "What would you like to pass on to the next generation?"). The discussion was lively and fascinating. We had a good mix of people, from traditional tellers to personal tellers, from Croatia to Sweden. I think we all learned a lot from each other, and I received a lot of enthusiastic feedback for the topic.

After the workshops Elena Asciutti from Italy organized a radio interview for Diffusione Fiaba with me and with Agnieszka Aysen Kaim. We discussed folktales and oral tradition, and had a lot of fun sharing our thoughts. We caught up with the other participants at dinner at a lovely restaurant, and that was not yet the end of the day. 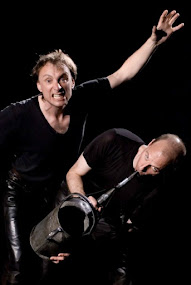 We got quite the bedtime story. Two Danish tellers, Jesper la Cour és Troels Kirk Ejsing performed their telling of Beowulf in 90 minutes. We were not only listeners, but also all active participants in the storytelling: we sat along the two sides of the stage, facing each other, and sometimes we were guests in a feasting hall, while others we were rowing a ship on the sea. The music and sound effects of the performance were supplied by a watering can, which was both hilarious and creative. It was playful, participatory storytelling at its finest, with a lot of fun moments and improvised jokes. I loved every minute of it.

We spent Friday at another location, in Odense. In the morning we heard lectures in the local university's building, had lunch at a street food restaurant (loved it), and then returned for some more presentations. Dr. Ane-Grum Schwensen told us about her work with Andersen's manuscrips, and let us in on a few secrets about how he changed his stories multiple times before publication. Swedish storyteller Göran Hemberg gave us a philosophical yet enjoyable lecture about how storytelling creates shared space. Frank Belt and Paul Groos from the Netherlands expanded the FEST competence model, working on descriptions of levels of what each competence entails. This was especially interesting because it helps storytellers define professional development, but doesn't try to constrict it. Last but definitely not least Mimesis Heidi Dahlsveen gave us a talk/performance on how digital storytelling has shaped our lives in the past two years. It was thought-provoking and unexpected.

After the lectures came the treat of the day: a visit to the Andersen House. Because renovations have not been quite completed yet, we could visit at a reduced price, and we even got a few glimpses behind the scenes. At this point, I have to confess that I have never liked Andersen stories (they made me cry and feel miserable as a child), but the museum managed to be a fascinating experience even for me. It presents Andersen as a person with a hint of humor, and the spaces designed by a Japanese architect were really beautiful. The museum is filled with interactive things, from a touch screen to explore Andersen's drawings all the way to a two-way mirror for the emperor's imaginary clothes. We also got to visit the children's play room, filled with tiny houses, crochet food, and colorful costumes. All of us immediately turned into children and barely wanted to leave the place at all.

Friday night concluded with an elegant candlelit gourmet dinner, singing, and dancing. The Danish organizers handed the flame of the conference to Lithuania. We drank wine, talked, and laughed together.

Saturday morning had another round of workshops for those who were not leaving yet. I joined Trine Krarup's three hour workshop on environmental storytelling, but could only stay for the first part. It was interesting to exchange our thoughts on stories and en environment, and how storytellers can reach new audiences. I left a little early, because I still had storytelling to do in the afternoon...

The conference officially ended with lunch. We said our goodbyes. Many people headed back home, but some of us stayed. Parallel to the conference there was also a week-long Danish storytelling festival in town, and we got invited for the closing day. After lunch we gathered at a local cultural center for a lively, crowded International Story Hour. Five of us performed: Susanne Schoppmeier from Germany told a "clever maid" tale; Kathleen Rappolt also from Germany told Barking Mouse and also a touching tale about a bird and freedom; Milda Varnauskaite from Lithuania told a gorgeous Lithuanian legend (I have never heard her before but now I am a total fan); Mattia Di Pierro from Italy told a funny story about a little gnome-like creature. I told last: a Hungarian legend about a fairy woman who turned people into flowers to save them from an invading army.

I spent the afternoon at a nice cafe with Pintér Zsolt and Kántor Szilvia, who were there representing the organizers of the 2023 FEST conference in Hungary. From there, we moved on to another cafe where we got a dinner of panini sandwiches in the company of happy and talkative Danish storytellers from the festival. And the day was not over yet: the closing performance took place in the harbor, in the building of a costume museum. We got to hear a lot of good stories, some in English and some in Danish. My dear friend Annemarie Krarup helped me understand the latter. I was especially happy to hear Maria Junghaus tell; she was the main organizer of the conference, and spent her time running around getting things done, so it was good to hear her tell a story as a treat. In English we got to hear Paul Groos from the Netherlands who told a local legend about the Devil's Mountain, and Paola Balbi from Italy who told us a stunning myth about the Mother Goddess. On my part, I added the Florida folktale about Mockingbirds on Fridays.

We walked back to the hotel late at night, taking the scenic route. The four days of the conference had flown by. I was filled with happy memories, new stories, and the excitement of being the part of a colorful and friendly storytelling community. As well as we managed to adapt to the digital world, nothing quite measures up to spending time together in person.

See you all on the road!