Once again I could not find a whole book, but luckily there were many Yao tales scattered in the volumes I have at home. The Yao number about three and a half million people and live in China and Vietnam. Their stories seem to be popular with the editors of folktale collections, even in English. Yao women are famous for their long, gorgeous hair, which they only cut once in their lifetime (when they turn 18), and wear wrapped around their head. 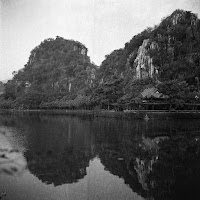 The legend of Liu Sain Mei (Maiden Liu) is one of the most well-known of the Yao tradition. It is about a Han girl who became a friend and ally of the Yao against oppression. She was a famous songstress who created many songs, and won many song contests with her quick wit, eloquence, and lovely voice. She defeated famous scholars and Han officials in song banter too. She married a Yao man of equal talent; together they turned into rocks, and their spirits became immortal.
One of my favorite legends from the Yao is the story of the Moon Hunters: When a scorching moon appears in the sky, famous archer Ya La and his clever wife Ni Wo set out to shoot it down. In the end the flames of the moon are extinguished, and the couple flies up to live on it - their figures still visible in the full moon (this story appeared in multiple sources). I also loved the tale of Longsi and the Third Princess, in which a young hunter and a clever princess fell in love and solved her father's tasks together. Unlike many Chinese love stories, this one had a happy ending. So did the story of the One-horned ox, about a boy whose drawings came to life. The ox he drew helped him travel to the sky where he fell in love with a fairy. When an evil lord tried to kidnap her, the boy drew a winged tiger and rescued his bride. The hero of The golden reed flute, Bayberry, saved his own sister from a(n evil) dragon, making it dance to the music until it died.

The legend of the Gathering of the Birds was gorgeous. It claims that every October 360 different kinds of birds gather in the Yao mountains to commemorate a maiden named Azhamana. She could embroider such beautiful birds that all of them came to life. When she was kidnapped by an evil lord, people tried to rescue her, but she died in the attempt and rose to the sky in the shape of a golden peacock.
One book had a pangolin story, about how a clever pangolin managed to trick all the ants it wanted to devour.

The legend of the rainbow was a classic swan bride tale, but it was much more beautiful than the others. Here the sky maiden hid her own wings voluntarily so she would not have to return to her cruel father. She married a mortal man and had a child, but eventually she had to return to the sky (her husband combed her wings for her). Her family followed, but the Jade Emperor pushed the son back to earth. The grieving parents' tears became rain, and they let the rainbow down occasionally to see if their child would climb back up to them...
I knew the cute story of the magpie's nest as an English folktale. The magpie tried to teach other birds how to build a good nest, but not many of them had the patience to follow all the way through. Treasure Mountain was a legend much like all the magic table cloth tales; here, the greedy king got locked into a cave for good in the end. (This story also appeared in multiple sources.)

Who's next?
The daur (dagur) people