StorySpotting is a weekly or kinda-weekly series about folktales, tropes, references, and story motifs that pop up in popular media, from TV shows to video games. Topics are random, depending on what I have watched/played/read recently. Also, THERE WILL BE SPOILERS. Be warned! 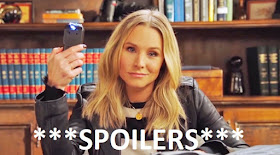 The new season of Veronica Mars is out on Hulu, and while this show missed me in its original run, I had a good time bingeing it.

Where was the story spotted?

Veronica investigates a series of explosions in her home town over the course of the season, until she manages to reveal and arrest the murderer (played by the amazing Patton Oswald). When the man is put into the police car in handcuffs, he tells Veronica that he plans on thriving in prison, publishing a book, and becoming a celebrity. He yells "You threw me in the briar patch, Mars!" 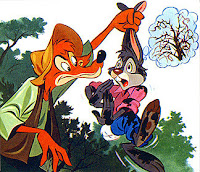 The "briar patch" is a reference to a well-known African-American trickster tale. Br'er Rabbit, the trickster character made famous by Joel Chandler Harris' "Uncle Remus" tales, is captured by Br'er Fox, who tries to find an appropriate punishment for the annoying hare. Br'er Rabbit begins to beg the fox to do anything but throw him into the briar patch. Fox falls for the trick and tosses the rabbit into the thorny thicket. The catch? Br'er Rabbit grew up in the briar patch, that is where he feels most at home. He's tricked the fox into putting him exactly where he wanted to be, and since the fox can't follow him into the thorny bush, he gets away once again.

This folktale motif has its own number: K581.2 - Briar-patch punishment for rabbit. Most often it appears as the second act of the (in)famous Tar Baby tale, where Br'er Rabbit is captured with the help of a human-shaped doll covered in sticky substance. You can read one version here. For further reading and more variants of this story, I recommend Bryan Wagner's book The Tar Baby: A Global History. For storytellers my favorite book to recommend is Affrilachian storyteller Lyn Ford's story collection, Beyond the Briar Patch. The trope also has its own TV Tropes page.

In the end, Veronica Mars fall for the same trick as Br'er Fox did, and pays for it dearly. The creators have been defending the ending of this season on various forums... we'll see what the next one brings.
A Tarkabarka Hölgy at 12:00 AM