Girl in the Chair: Hare rescues the sun

Girl in the Chair is a blog series on research for storytellers. You can find the details about it in the opening post here. 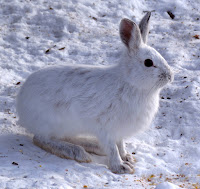 This request came from Coral Conant Gilles. She asked me to look into a story she found in a book a while ago. It's called How Hare Rescued the Sun, and she remembered reading it in Michael J. Caduto's Earth Tales from Around the World. She also supplied a reference to it from the Storyteller's Sourcebook. She asked me to see if I can find other variants of the story, other sources for it, or similar tales from other parts of the world.

In Caduto's book the story is marked as an Inuit tale from Siberia. Evil creatures named Tungaks steal the sun and hide it in a crystal vessel underground. The animals gather in the darkness, trying to select someone to go and get back the sun. Polar Bear and Wolf are suggested and rejected, until the wise Owl decides Hare should go. Hare sneaks into the Tungaks' underground cave and steals the sun. While fleeing, he breaks the vessel, breaking part of the sun off and kicking it into the sky - that part becomes the moon. Hare kicks the sun up as well, and as light floods the world, the Tungaks flee back underground.

Once again, the first step is to see if the collection references a source. Luckily, Caduto does: He says the story has been retold from "How the Sun was rescued" in James Riordan's The Sun Maiden and the Crescent Moon. Luckily, I own a copy of this book, so I can pull it from the shelf and see what the story looks like, and what sources Riordan references (see Step Four).

The Sourcebook references a picture book version of the tale, titled How snowshoe hare rescued the sun: A tale from the Arctic, by Emery Bernhard. The motif number is A721.1.3.1 - Sun harpooned and stolen by under earth demons standing on each other's backs. I wrote the title of the book into Google Books, but sadly, this picture book has no Preview. However, finding some reviews of the book I found out that it names the Siberian Yuit People as the source of the story. From another review I also found out that the book is retold from James Riordan's collection. So, I circle all the way back to Step Four.
(If you can't peek into a picture book that is based on a folktale, it is worth searching on Google for reviews of the book. They often refer to the original folk sources. If you are lucky.)

Typing the title of the story into Google yields some useful results too. I find a blog post that contains the Bernhard version, one unsourced retelling, and the text from Riordan as well.

There are some differences from Caduto and Bernhard's retellings here: the sun is not kept in a crystal vessel, but rather a "white stone pot." Riordan marks the story as "Eskimo" but doesn't specify an ethnicity. The entire book, according to the Introduction, is a collection of tales Riordan himself collected in 1977 and 1981 among the indigenous peoples of Siberia, and also from archival sources, but sadly he does not note which one came what source (or teller). Usually, when we hit the first collection (straight from the oral source) we have gone as far back as we could.

A quick Google search tells me that Yuit is another name for the Siberian Yup'ik (Yupighyt) people. Looking for information on "Yup'ik folklore" in Google I find this page, which also references some books such as Tales and Legends of the Yupik Eskimos from Siberia. Sadly the book has no Google Books preview, so I can't tell if the Hare story is included in it. It might be worth a look, if for nothing else, then cultural context.
Another link, however, leads to a much older book, The Eskimo of Siberia by Waldemar Bogoras, which does contain a much shorter variant of this story. This book, in turn, claims the tale was borrowed from the Chukchee People, and points to another of Bogoras' books, Chukchee Mythology. This book is also in the public domain, so I found the Chukchee story online as well, here. These are two less elaborate, but more authentically sourced texts of the same tale.

I looked into the motif number noted by the Storyteller's Sourcebook to see if I can track down similar Inuit/Siberian tales. Sadly, the Sourcebook specified the motif number from A721.1 - Theft of Sun, which is too broad a motif to be useful to us. To be sure, I typed "A721.1.3.1." into Google Books, but got no useful results.

What are the tungaks, the key villains of the story? Once again I turn to Google Books, and search for "tungak" and various co-terms such as "Yupik", "Siberia", "Inuit", and "Eskimo". One of the first things that pops up that the term can also be spelled tuurngaq or toongak. I repeat the searches with those spellings too. Various books translate the word as "spirit" or "evil spirit" or even "devil"; occasionally "god", "shaman", or a shaman's spirit guide. I find a reference to more stories in this book that contains Siberian tales. Some call it The Great Tungak, and individual spirit that hates humans. I find some relevant info in this encyclopedia as well.
This volume seems to contain more information. Since it looks old enough to be in the public domain, I go to my favorite site, archive.org - and I am lucky: the volume is available online. But surprise! I can't find the part about tungaks in it. After some more poking at Google Books, turns out that somehow the results referred to another volume in the same publication series, The Labrador Eskimo, also available on archive.org. So, now I have more info about Tungaks! (Search in the book's text to find all the relevant paragraphs)

Combing through stories where a trickster figure steals the sun and moon we can find quite a few indigenous examples from North America. Just like Hare is a trickster in many cultures, other tricksters also have similar exploits bringing back the light into the world. Google Books has quite a few results for "steals the sun" or "stole the sun" or "rescues the sun". These stories are not quite the same as the Yup'ik story above, but they can be valuable comparison. Some that I found useful (click for books):
Coyote Steals the Sun and Sun and Moon in a Box
Grandmother Spider steals the sun
Raven Steals the Light
We get the best results in Google searches if we search for various phrases in quotation marks, such as "steals the sun" or "stole the sun" or "rescues the sun" and add folktale or myth next to it. It takes multiple rounds of searching, but weeds out irrelevant hits. I also tried some of them with addig Yupik or Siberia or Eskimo or Inuit next to the phrases to narrow down the search. Some interesting results:
This article
This book
This book
This book
This book

Ideally, with indigenous stories like this, an in-depth researcher would reach out to the original communities. I only looked into this a little bit, and came across an interesting website, but the real would would require more effort, and probably a lot of asking around. Contacting actual tradition bearers might be the best way to uncover, verify, and ethically learn indigenous cultural materials such as myths of folktales. Additional search help from someone who reads Russian might also be helpful.
A Tarkabarka Hölgy at 12:00 AM